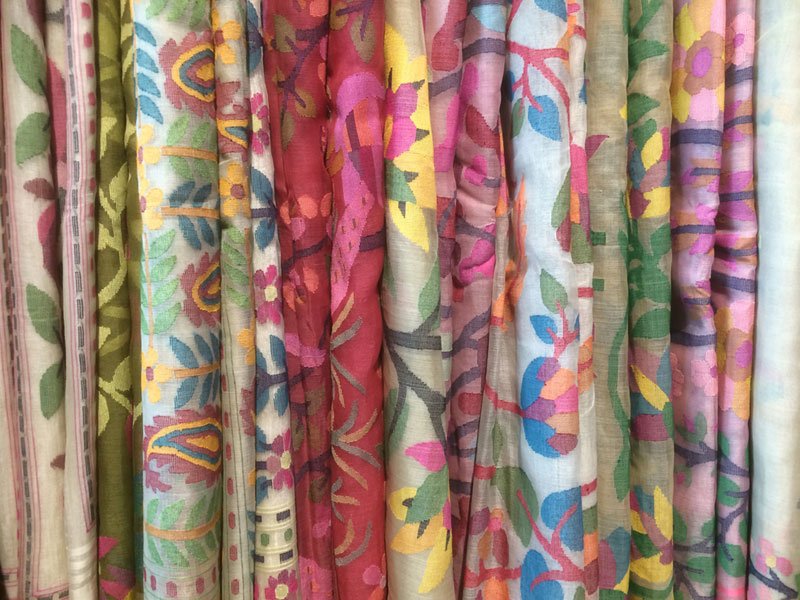 Today’s travel post is brought to you by down2earth design client and blog reader Rita Berson. She recently had the opportunity to travel to India and was inspired by the beautiful textiles she encountered.

Traveling to India, you can’t help but be struck by the colors, patterns and textures all around you. 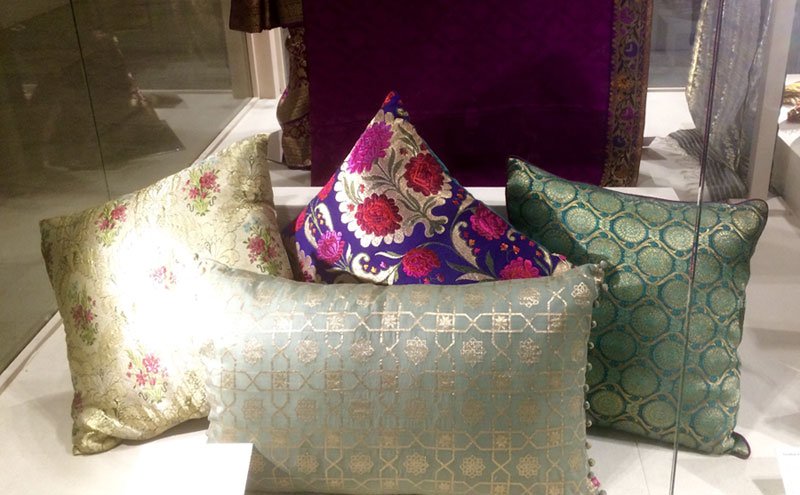 Unbroken Thread – Banarasi Brocade Saris at Home and in the World
Exhibit at the National Museum, Delhi

A Brief History of Indian Textiles

The beauty and refinement of Indian textiles reached their peak during the Mughal period around 1500 to 1800, when they were used for ceremonial purposes. In addition to courtly garb, they were used to decorate buildings and make tents, as procession flags, and even as decorations for elephants!

As Mughal power waned at the beginning of the nineteenth century, the demand for luxurious courtly textiles also declined. The British East India Company had a long history of trade in Indian textiles, but at the time of the industrial revolution, British fabric guilds demanded only white cotton fabric exports from India to be printed and finished in Britain. This caused widespread unemployment for India’s weavers and embroiderers, as the need for courtly garb and decorations declined and was replaced by demand for plain white unadorned and unfinished fabric. The British also imported finished goods into India, further decreasing the reliance on native weavers and crafters. Textiles continued to have a big impact in India’s history as Gandhi took up the call for self-rule and independence, and in the 1920s appealed for people to spin and weave their own fabrics instead of importing finished goods from the British.

What happened to Indian Textiles?

Despite so many setbacks, Indian textiles survived and thrived. Indian textiles can be seen in interior design projects in homes and in commercial applications throughout the world. Traditional design and artisan production of textiles are also starting to make a comeback in a big way.

Local initiatives in India have focused on bringing back traditional Indian textiles. Biswa Bangla, an organization sponsored by the government of West Bengal with several stores in major Indian cities, has made it its mission to promote crafts, in particular hand-woven muslins, traditionally made in the area. In addition to beautiful saris and aromatic teas, you can also find a curated collection of traditional elements for use in interior design. Gamchha, a kind of thin traditional towel found in India, Kantha, a type of embroidery made from old saris stacked on each other and hand-stitched to make a thin cushion, Khes, a floor spread and bed covering traditionally made of cotton, and Sheetal patti floor mats are all sold at Biswa Bangla stores. 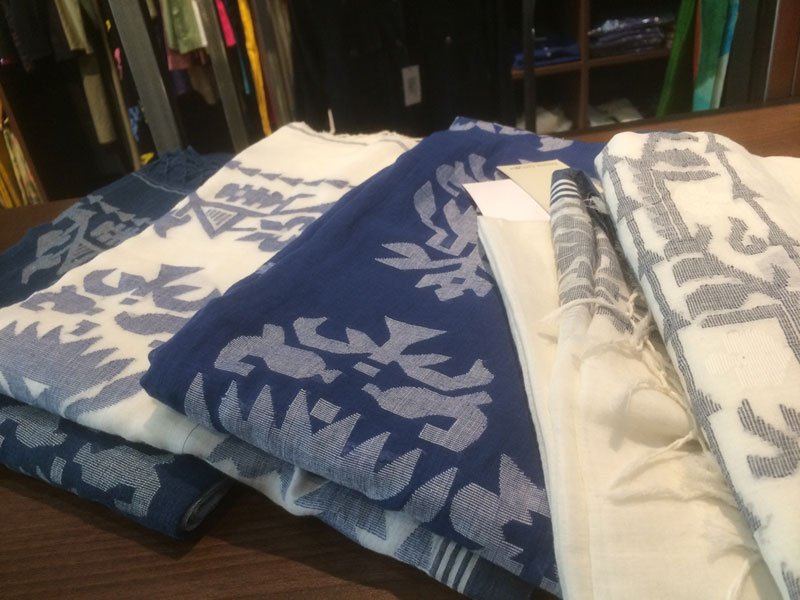 FabIndia, a chain of over 200 stores found throughout India, focuses on traditional techniques, skills and hand-based processes. I liked this store because their products were natural, craft based, and contemporary. They were definitely the kind of bed spreads, curtains and pillow covers I could see in my own home! 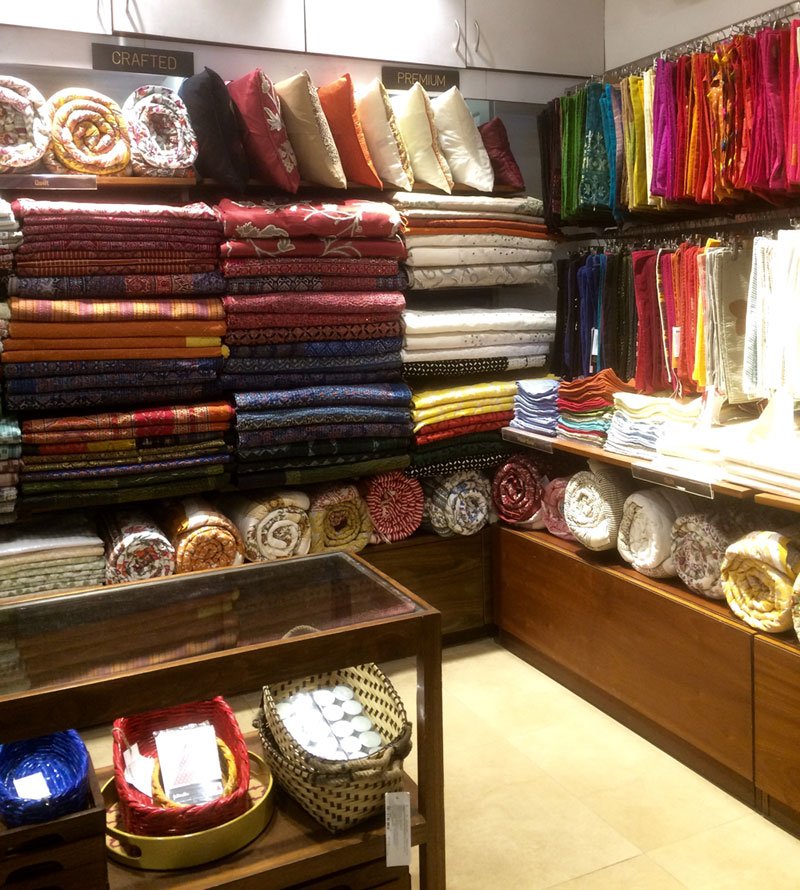 While en route to India, I had the pleasure of meeting Chandrika Vashista, head of design at Mridul Enterprises in Delhi, on her way home from the New York Textile Show. Her company specializes in designing and producing textiles used in interior design. Traditional Indian handicrafts and patterns have inspired her contemporary designs. Textiles produced in Chandrika’s Delhi workshop have been enthusiastically embraced throughout the world. Modern interpretations of her traditional Indian designs have been sourced by companies like West Elm, Pottery Barn, CB2 and Anthropologie, for bedspreads, curtains, rugs, and decorative pillows.

How can I bring some of these beautiful things home?

When traveling, seek out genuine local goods that are produced by artisans who can profit from the sale of their goods. Think about your life at home. Will you use these items? Would you buy them if you saw them in an interior design store back home? And most important: leave plenty of room in your suitcase. If all else fails, you can always ship your new hand-woven rug home by FedEx or DHL!

National Craft Museum in India is now a Google Art Project
V&A Museum in London: The Fabric of India: Textiles in a Changing World
Muslin production in Bengal