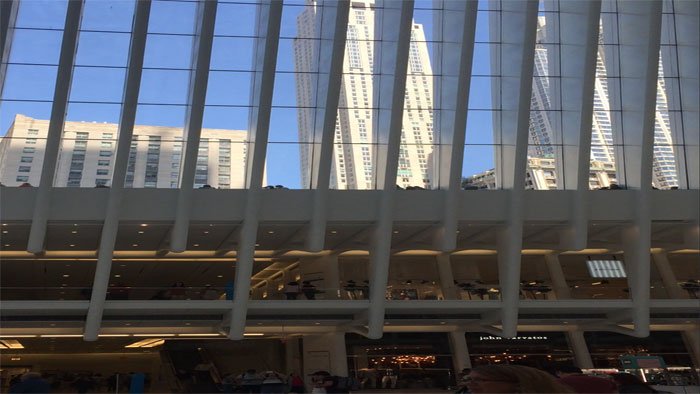 UPDATED!  11/10/2017 Scroll below to listen to a newly published podcast episode about the Sagrada Familia from 99% Invisible in Podcasts.

Amy and I were reflecting on our spring break adventures and two of our highlights shared a very similar theme to them: strong structures that appeared light and uplifting.   The reference held true for both the World Trade Center Transportation Hub’s Oculus in New York City and the Sagrada Familia in Barcelona Spain.

Amy’s dad Gary (and down2earth interior design bookkeeper), took Amy and her son on a trip to the Freedom Tower at the site of the former World Trade Center in lower Manhattan. 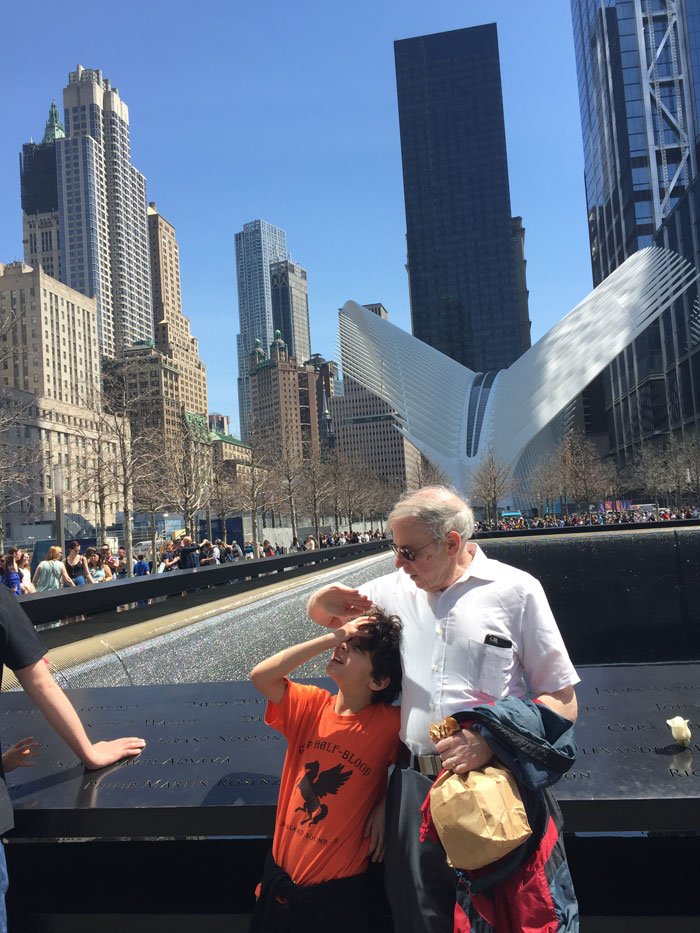 Of course the memorial at ground zero was tremendously moving and the view from the observation deck was panoramic.   But surprisingly, if you haven’t been following New York City architecture, the transportation hub itself is a site to behold. 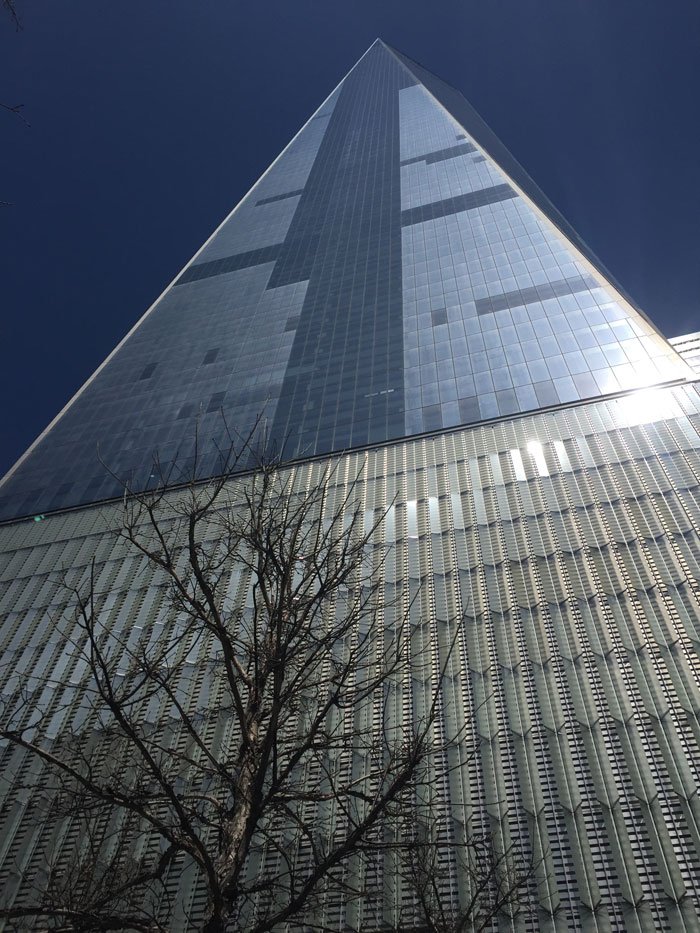 The Oculus transportation hub, which cost over 4 billion dollars and took 12 years to construct, is New York City’s largest public space to be built in recent years.   There is much controversy among architectural critics about whether the design of Santiago Calatrava’s World Trade Center Transportation Hub project is a success, read more about it here.

But the scale is soaring and the similarities to Eero Saarinen’s iconic TWA Flight Center at JFK airport are undeniable. 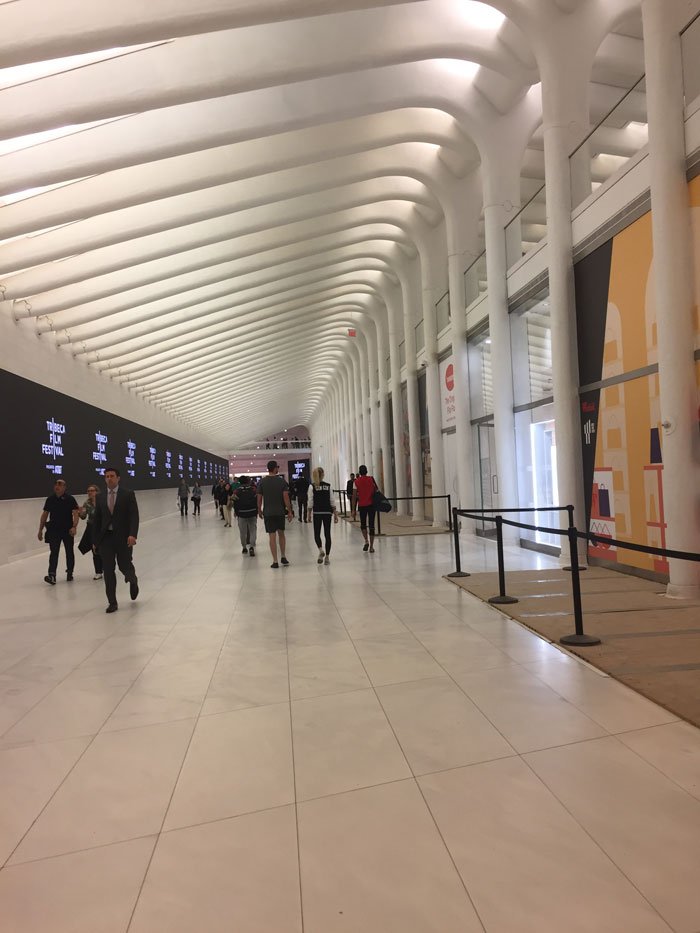 The overwhelming impression is jawdropping because, while the architecture is made of concrete ribs, it looks like it floats.   An analogy that comes to mind is the ribcage of a whale, although apparently a dove taking flight was the intent. 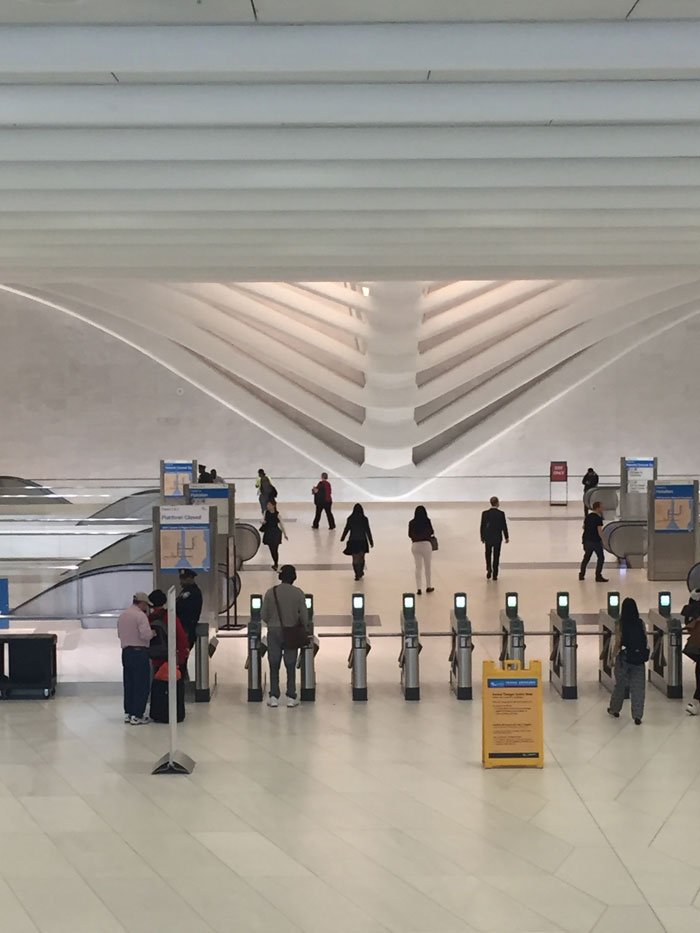 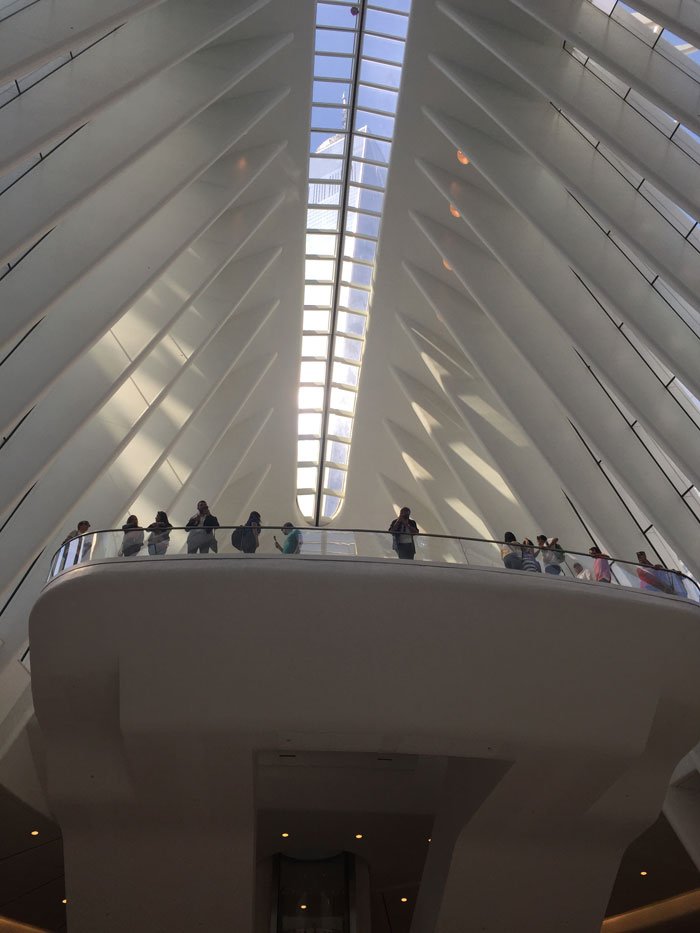 The illusion of being light as air is something I feel cannot be truly captured in the photos at the Sagrada Familia in the same way that it can be felt when standing in the cathedral. Antoni Gaudi’s cathedral interior is intended to feel like a forest. You can see that the pillars are like trees though this wondrous forest feels vast and open. 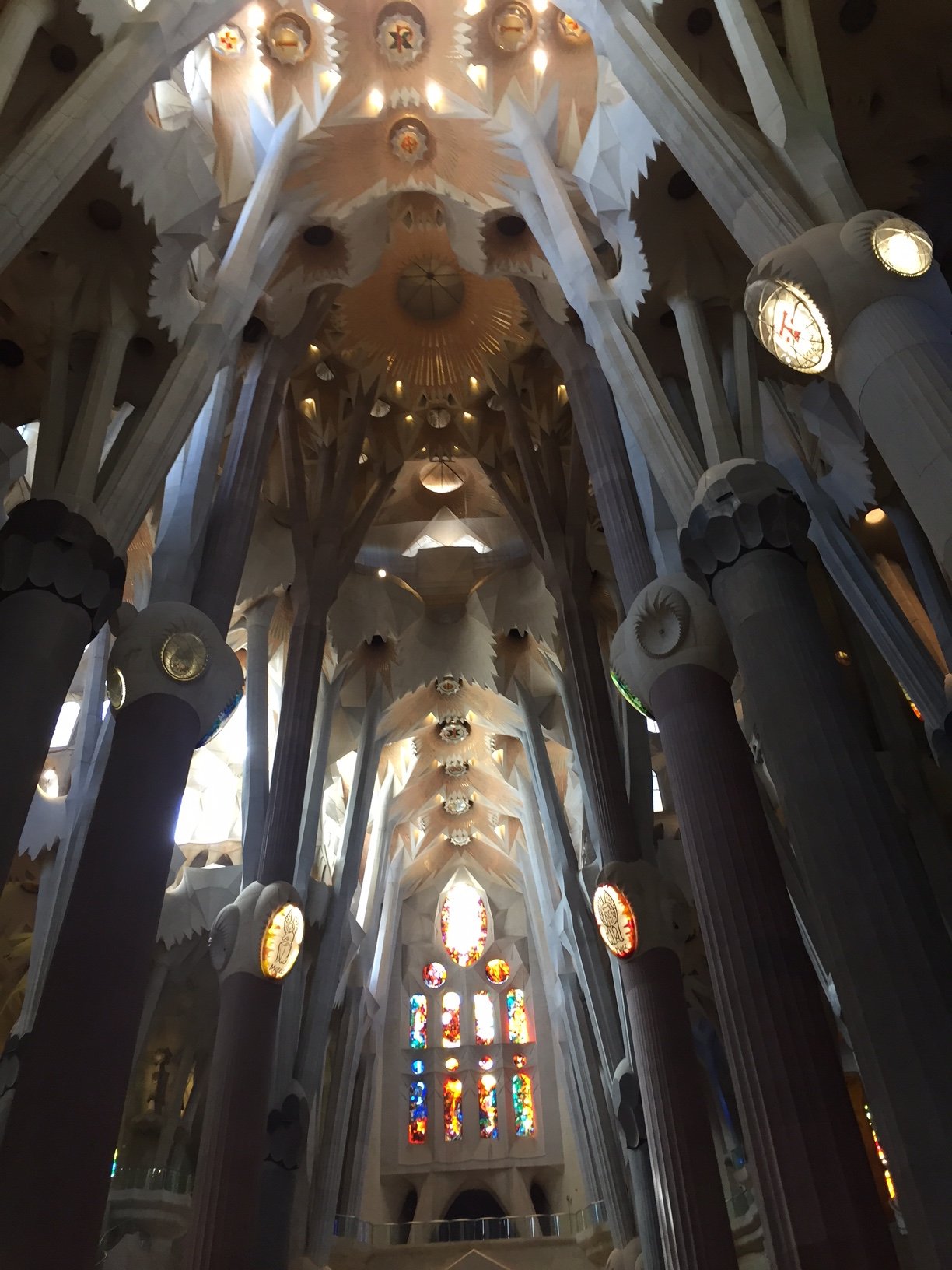 The colors of the stained glassed windows changes through out the day as the sun moves over the structure; it helps to shift the mood and your perception when you look up. When the blue tones were shining the vaulted ceilings, I truly felt like I was outdoors, as if I was walking in a vast forest filled with amazingly sturdy yet light trees. It felt airy and breathtaking. 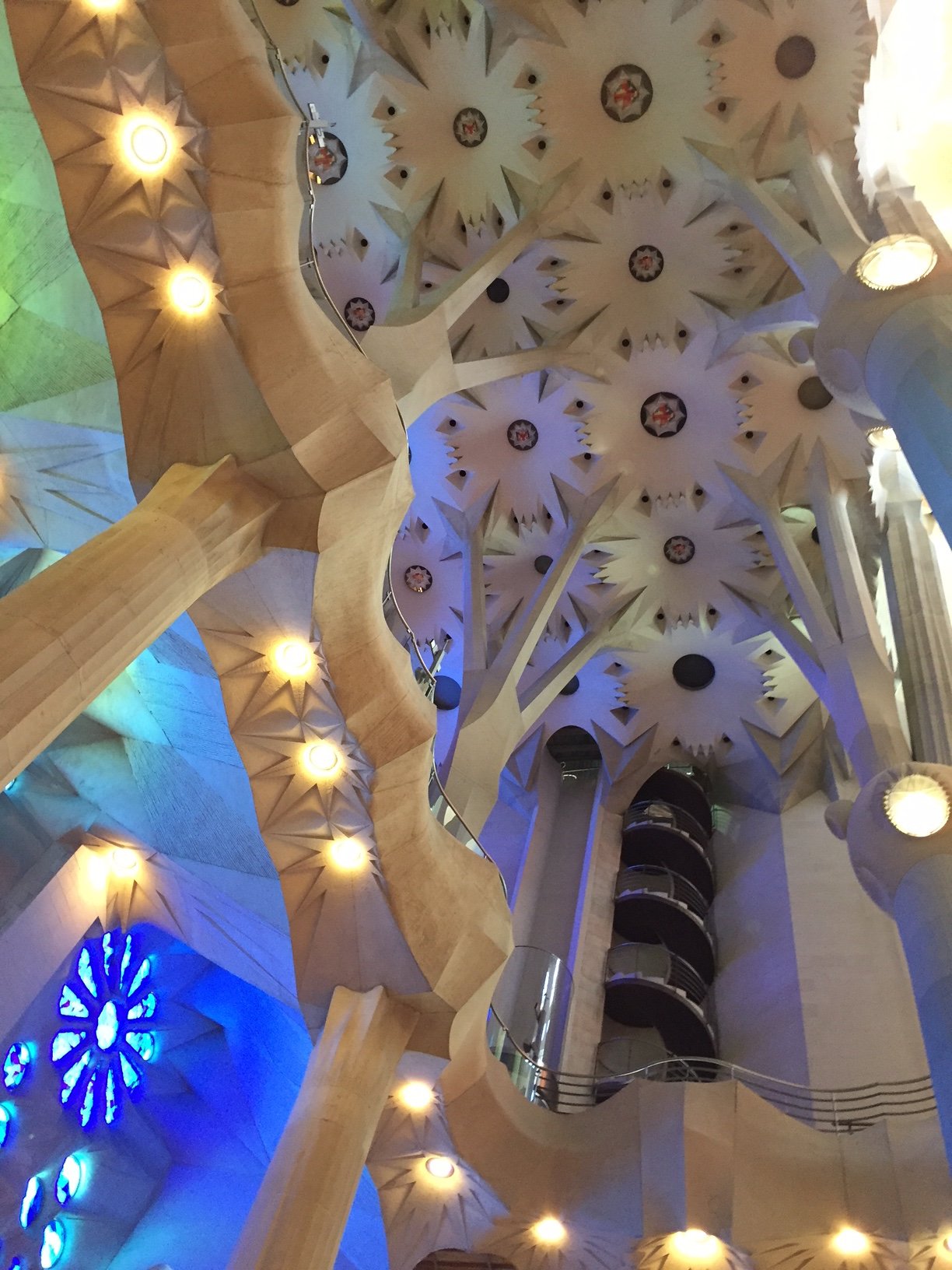 When the orange tones hit, it felt more like a wonderland and yet the tone seemed heavier and yet the pillars still projected a light as air quality. 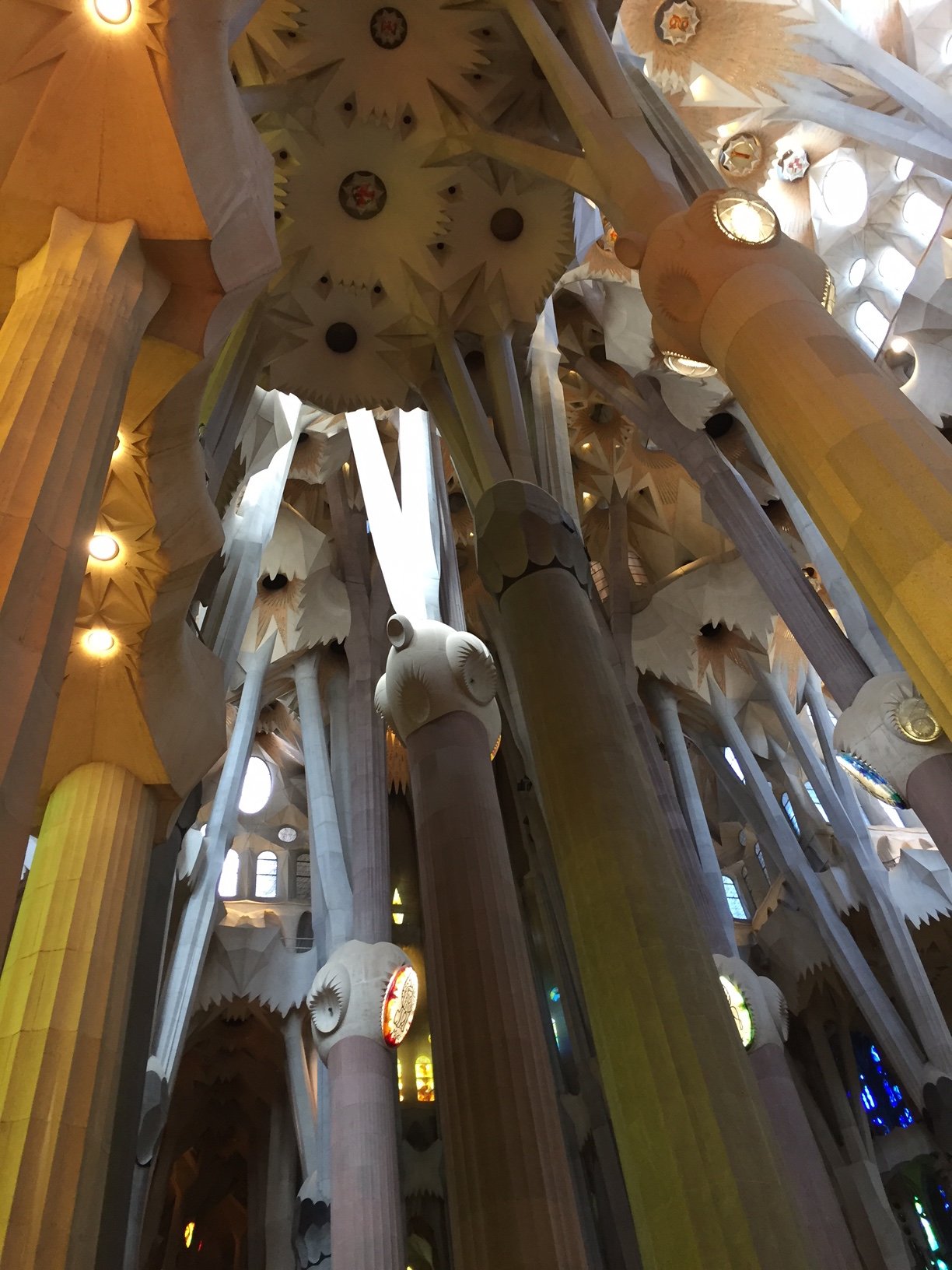 I love seeing structures as I travel, built at different times, for vastly different purposes. It’s amazing to see how architects use different techniques to create soaring buildings to elevate the spirit. 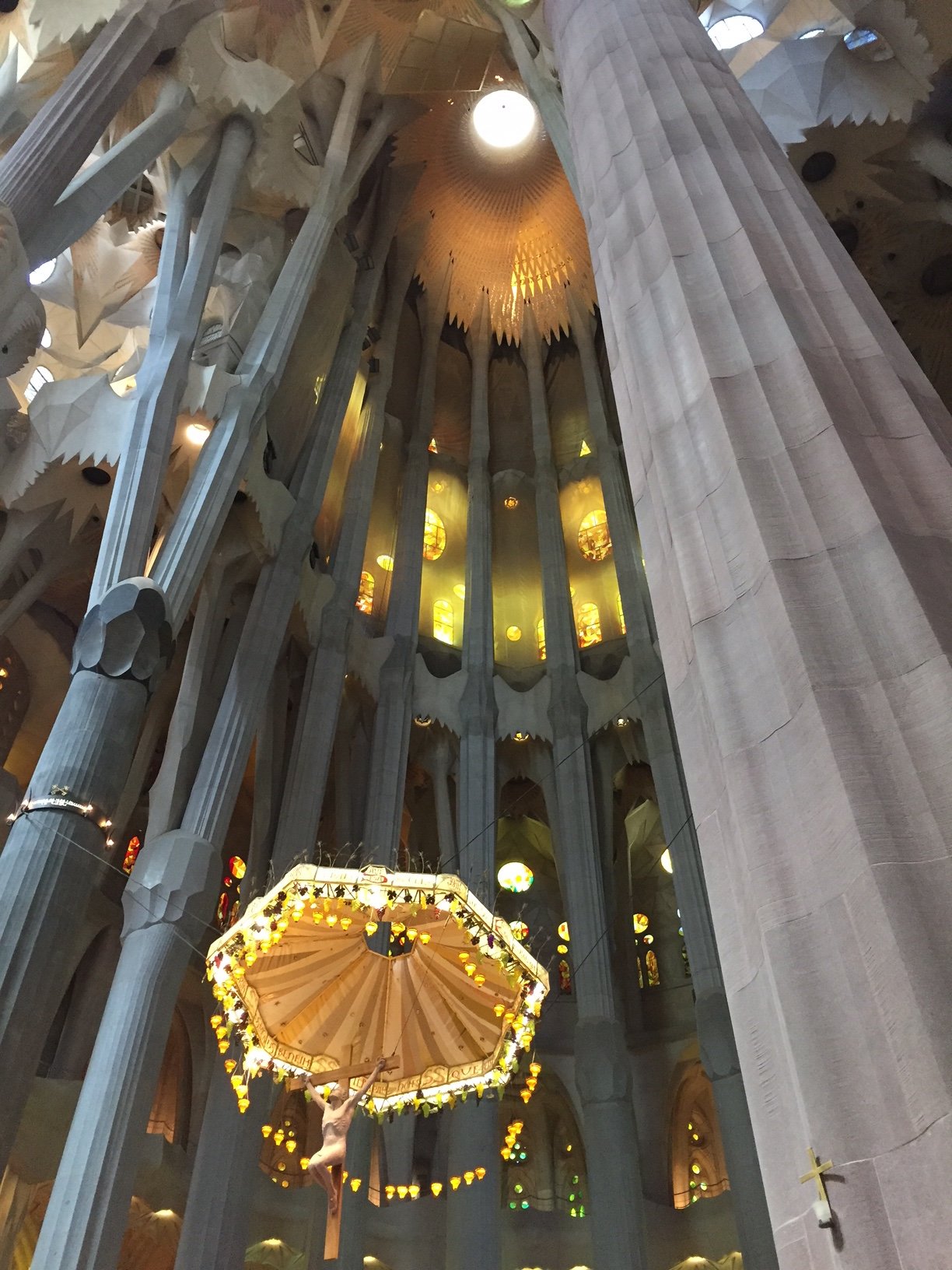 UPDATE: A new podcast from 99% Invisible by Roman Mars (a great design series) that focuses on the Sagrada Familia. Here is the description:

There are a lot of Gothic churches in Spain, but this one is different. It doesn’t look like a Gothic cathedral. It looks organic, like it was built out of bones or sand. But there’s another thing that sets it apart from your average old Gothic cathedral: it isn’t actually old. Gaudí wasn’t able to build very much of his famous church before he died in 1926. Most of it has been built in the last 40 years, and it still isn’t finished. Which means that architects have had to figure out, and still are figuring out, how Gaudí wanted the church to be built La Sagrada Familia.

What are some places you’ve been that resonate with you the way the World Trade Center Transportation Hub’s Oculus in New York City and the Sagrada Familia in Barcelona Spain have for Amy and me?