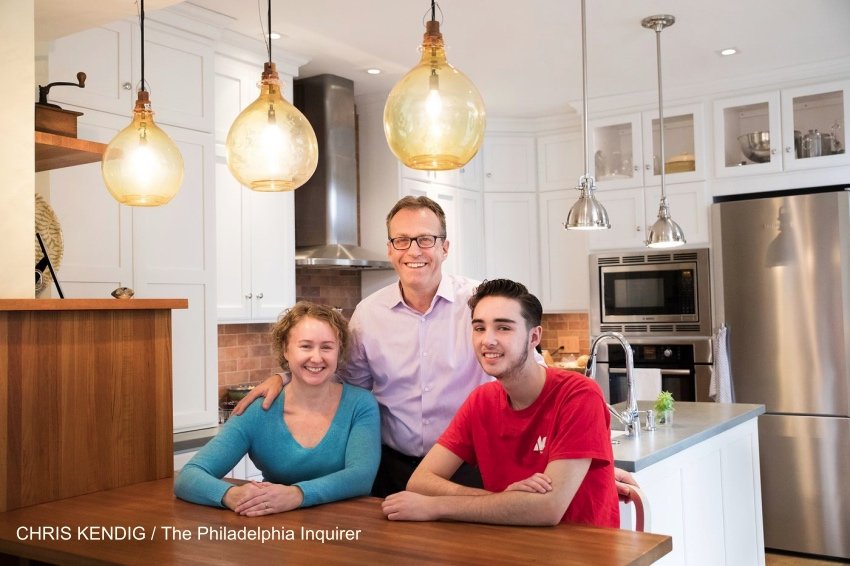 Happy new year to our down2earth interior design readers!  On New Year’s Day d2e was featured in the Philadelphia Inquirer’s Real Estate section.  The article, “Fairmount rowhouse for blended family combines historical, modern, and sustainable” written by Terri Akman focuses on Heidi Siegel and Fran Van Lint’s family home. They opened their home to the Inquirer to talk about sustainable modernization.  To read the full article at philly.com, click here.

The family worked with Amy on the interior design for their home that mixed old and new, and focused heavily on sustainable design throughout. While the home is completely renovated, Heidi and Frank aimed to preserve as much of the original detail as possible.

The claw foot tub in the bathroom became a focal point when Amy, Heidi, and Frank decided to have the exterior painted green and reglazed.

The stairwell railings were left in tact highlighting the original detail of the 1860 rowhome.

When the family parted with furniture and items that were not a part of the new interior design of the home they donated the goods to ReStore. Amy has posted about this particular spot which is Habitat for Humanity’s nonprofit home store. ReStore sells the donations that are received and focuses on home improvement. Read more about the ReStore blog post, see below.

For areas that were fully renovated like the kitchen and bathroom, concrete counter tops sit on custom cabinetry built by a local craftsman.

The kitchen island is made out of reclaimed wood panels that came from the interior of an old bank boardroom, and made by a local wood worker.

Heidi and Frank’s home has been recognized several times in publications, such as Bedrooms and Baths Magazine, HGTV Magazine, and now the Philadelphia Inquirer.   It is gratifying to see the hard work and focus on sustainability get such nice attention in the press.    To take a further look into this beautiful home, check out down2earth interior design’s project portfolio page, click here.